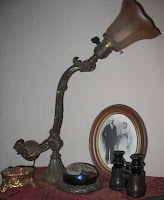 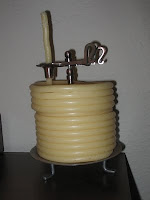 When my now-husband and I started dating a few years ago, he commented on my house as being very "Steampunk" - and I had no clue what "Steampunk" was or if it was a compliment or an insult. So off to Wikipedia I went:

"Steampunk is a sub-genre of fantasy and speculative fiction that came into prominence in the 1980s and early 1990s. The term denotes works set in an era or world where steam power is still widely used—usually the 19th century, and often Victorian era England—but with prominent elements of either science fiction or fantasy, such as fictional technological inventions like those found in the works of H. G. Wells and Jules Verne, or real technological developments like the computer occurring at an earlier date . . . Various modern utilitarian objects have been modded by individual artisans into a pseudo-Victorian mechanical "steampunk" style, and a number of visual and musical artists have been described as steampunk."

In other words - take something from the Victorian era and make it useful in today's world - and you've probably got Steampunk. The genre also is very romantic in a machine age/science focused theme - think of the elegance of the submarine the Nautilus from the movie 20,000 Leagues Under the Sea.

I decided to take his comment as a compliment - and eventually married the guy. We now have made a hobby of adding "Steampunk" elements to the house - everything from a Victorian floor safe (now an end table), to an Art Noveau Eperge (fancy term for flower vase centerpiece), to funky candlesticks and vintage lighting.

My husband would like to take it one step further, and build a computer key board with key tops off an antique typewriter, and have the processor housed in an elegant wood cabinet.

If you like adding vintage details to your decorating - google "Steampunk" and you might find some ideas you'll like for your own home. I've included photos of a few samples of "Steampunk" items we've found. And you don't have to spend a lot on them - the candlestick was $4 at Arc Thrift Store and the leather wrapped binoculars in the photo of the Art Noveau lamp were also an Arc Thrift Store find for less than $5 - and they still work! Enjoy!