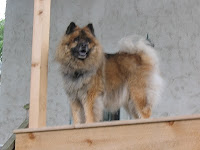 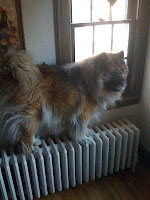 I have been watching Chewie, my 13 year old Chow/Keshound mix, grow into a grand old dog. I say "grand" as he continues to do many of the things he has always done - chase squirrels, beg for people food, stand on top of the living room radiator to bark at the mail carrier - and he reminds me growing old doesn't have to mean giving up the things you love to do. You just do them differently.

Chewie just learned a new trick last month (say "pray" and he does!), and he's adapted to his few limitations quite well. He will wait for us to help him get on the bed instead of trying to make the jump himself, he takes the stairs a little more cautiously, and he's learned if he doesn't listen to a command right away, we may just assume Chewie can't hear us and he won't have to respond at all. Not a bad place to be if you're Chewie.

Chewie was my first dog when I moved to Camden. I remember it was about this time of year, a few days before Christmas, when Chewie came into our lives. My boyfriend and I stopped at the Humane Society in Golden Valley. We were thinking of getting an older dog, and we were considering several - and then I saw Chewie. He was the cutest ball of fur I'd ever seen, and when we went to "interview" him he immediately peed twice and pooped once - as if saying "I dare you to take me home" and of course we did. He had a cold and my boyfriend started a sneezing match with him on the counter as I filled out the paperwork to make him our little sneezing fur ball.

Chewie was an instant hit with friends and family. He was just too adorable for his own good. He was also unbelievably smart - house broken in less than a week, he never chewed or destroyed anything except for a jade plant that attacked him once, and he learned his parlor tricks readily. Sit, stay, down, speak, shake, wave, balance treat on nose, heel, and occasionally - roll over - but his fluffy tail would get in the way on that one. If David Letterman had a category for "tricks only stupid people teach their dogs" we would have qualified - we thought it was funny to put Chewie in a "sit" and then place a treat in our back pocket and say "steal"- and he took the treat out of our pocket. Hmmm - that probably wasn't the best idea . . .

Although Chewie is extremely smart - there is a Chow side too - loyal to the family, steadfast in his devotion to us, and just a touch of unpredictability. He has required us to be diligent about maintaining our alpha status, and he continues to look us straight in the eye when given a command, as if to say - "I love you, but that request is pretty damn stupid and I'll do it but only for you."

When I started dating Robert, who is now my husband, he eventually told me he knew winning over Chewie was going to make-or-break the whole deal. Luckily Robert grew up with some really amazing hunting dogs with names like King and Bo - and he moved into the alpha male spot right away, winning Chewie over with long walks, lots of praise, and I suspect an Oreo or two along the way. With Chewie's stamp of approval, Robert became his second dad.

Watching Chewie grow old with grace and dignity is a reminder although aging is inevitable, how you manage it is entirely up to you. Chewie's approach is very simple - take one step at a time, get enough sleep, don't eat too much, go for as many long walks as possible, and ignore the things in life that really irritate you. A simple plan all of us should probably learn from.